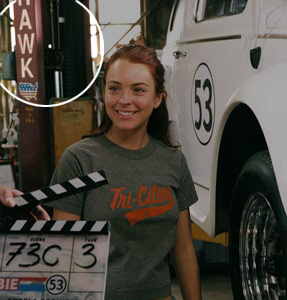 This weekend, go see the new movie “Herbie: Fully Loaded.” Don’t go because you want to relive an old favorite (“The Love Bug”) or because you’re in love with Lindsay Lohan, though. Go because an Amsterdam native is featured in the film.

Two hydraulic car lifts made by Mohawk Lifts on Vrooman Avenue appear in the new movie. An A-7 and Tomahawk, both two post lifts, can be seen quite clearly, said Gerri Kaezor, shipping manager, who saw the film last Saturday night at Emerald Cinemas.

“It’s good advertising because it’s in there quite a few scenes,” Kaezor said.

She was proud to see a product from her company on the big screen.

Mohawk lifts made their first lift in 1981 and has grown to be an international business and the “biggest supplier of lifts to the government,” said Steve Perlstein, sales and marketing manager of the company, which also goes by the mane Mohawk Resources, Ltd.

Some of their more notable clients include General Motors, United Airlines, and the U.S. Post Office.

The thing that sets Mohawk’s lifts apart is that they can be bolted to concrete. Most other lifts must be secured into the ground, Perlstein said.

The company has around 75 employees and services coast to coast and Canada, Kaezor said. Their lifts will soon e shipper to Iraq for military use, she said.

Mostly their products are for “bread-and-butter” vehicles like cars, trucks, and buses, Perlstein said. Mohawk did once builds a train lift once for the Toronto Transit Commission, though, he said.

The larger lifts, like the mobile column and parallelogram lifts, are built and stocker, since they are usually in high demand, Perlstein said.

That is the type used in “Herbie: Fully Loaded.”

Disney Studios contacted Perlstein and asked for his services. As simple as that, on a truck, out to a distributed in California he stuck three more lifts that went to the set.

“Whatever the editing reasons were, someone decided not to use the last one,” Perstein said.

The A-7 needed to look older, so the set designers worked their magic and painted it up, he said.

After the movie wrapped, the lifts stayed in California to be used as demo models.

Of seeing his work featured in a Hollywood production. Perlstein said, “It’s satisfying to know that I had this much to do with that machine.”

This is not the first tine Perlstein has experienced this high, though. A Mohawk lift also appeared in he 1987 Kevin Costner film “No Way Out.” On some episodes of the television show “Monster Garage” a Mohawk life can be seen, and another was featured in a Superbowl commercial for Firestone tires, Perlstein said.

Mohawk Lifts does not pay for placement of their products, nor do the studios offer funds for its use.

“We’ve never paid the placement fee that some of these shows want,” Perstein said.

“I have one condition for lending my lifts for free, the decal stays on the lift,” he said.

Kaezor confirmed that the mohawk emblem is displayed in the plain view in the new Herbie movie.

Though Mohawk Lifts has no plans as of now for another Hollywood deal, Perlstein said, “If the contact us again, we’d do it again.”